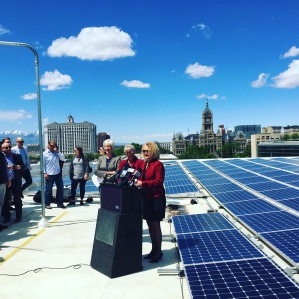 Today, Mayor Jackie Biskupski sent to the Salt Lake City Council for their consideration the franchise agreement between Salt Lake City and Rocky Mountain Power, the City’s electricity provider. The franchise agreement has been under negotiation for more than a year, and complements a Clean Energy Cooperation Statement that the Administration and utility signed a few weeks ago.

The Clean Energy Cooperation Statement between Rocky Mountain Power and Salt Lake City lays out how the utility and the City will work together to reach ambitious clean energy goals, and pave the way for the adoption of the new five-year Franchise Agreement between Salt Lake City and Rocky Mountain Power. The previous 25-year Franchise Agreement expired in January 2016.

“We need to put strong action behind our pledges to clear our air and address the threat of climate change,” said Mayor Jackie Biskupski. “This agreement is a significant milestone in the city’s relationship with our electricity provider, and illustrates what can be accomplished when we work collaboratively to ensure a healthy, sustainable future for our City.”

Such collaborations include: Salt Lake City subscribing to at least 3 megawatts (MW) of solar energy through Rocky Mountain Power’s Subscriber Solar Program; the continuation of and further investment in energy efficiency data collection, bench-marking, and outreach; and the joint development of options for increased renewable energy use by the community at-large.  Further investments in electric vehicle infrastructure and technologies are also encouraged.

The Cooperation Statement establishes a target date of March 31, 2017 for completion and acceptance of an implementation plan to achieve the energy goals listed. Annual update reports will then be published each year starting in 2018.

The complete Cooperation Statement details the City’s broader Climate Positive plan are available at SLCgreen.com/ClimatePositive. The new Franchise Agreement will become effective upon adoption of an ordinance by the Salt Lake City Council.