Salt Lake City Corporation has been using renewable energy to support government operations since 2005, when the Public Utilities Department started turning methane into energy at the city’s wastewater treatment plant. Since then, the City has steadily added to its renewable energy profile. By installing solar panels on over a dozen city facilities, becoming the largest subscriber to Rocky Mountain Power’s Subscribe Solar program, and establishing the Salt Lake City Solar Farm, Salt Lake City is able to source roughly 14% of its municipal electricity from renewable energy sources.  Although 14% is certainly an accomplishment, it does not fulfill the City’s ambitious goals of achieving 50% renewable electricity for municipal operations by 2020 and 100% by 2030.  After taking small steps towards these goals for so many years, Salt Lake City is finally ready to run.

With this extraordinary project, Salt Lake City will reach and likely exceed its 50% renewable energy goal for municipal electricity.  When the solar farm is up and running in 2023, it will power between 50 and 90% of the City’s municipal electricity consumption. Because electricity generation is responsible for over 50% of Salt Lake City’s municipal GHG emissions, the Electron Project will greatly reduce city emissions, helping to achieve the City’s emission reduction goals and improve air quality.

END_OF_DOCUMENT_TOKEN_TO_BE_REPLACED

SLCgreen is excited to welcome Christopher Thomas to our team as the new Senior Energy & Climate Program Manager!

He previously worked with the Sierra Club, HEAL Utah, the energy efficiency firm ETC Group, Salt Lake County, and more. He holds a B.A. in English and Biology from Grinnell College and a Master’s Degree in Information Systems from the University of Utah David Eccles School of Business.

His is an important role for the Sustainability Department and the City as a whole, as the lead staffer (see our farewell post to his predecessor Tyler Poulson) on many of Salt Lake City’s climate initiatives. Learn more by visiting the Climate Positive SLC plan.

Christopher has already hit the ground running and we’re thrilled to put his expertise to work!

His main responsibilities include:

Check out the press release below for more details!

Today at its annual conference, the United States Conference of Mayors recognized Mayor Jackie Biskupski for her leadership to advance renewable energy and tackle climate change. Presented at the “Climate Luncheon,” Mayor Biskupski was recognized for Salt Lake City’s efforts to transition to net-100 percent clean electricity, which made significant strides in 2019 with the passage and enactment of HB 411, the Community Renewable Energy Act.

END_OF_DOCUMENT_TOKEN_TO_BE_REPLACED

Every summer, across the valley, fresh fruit goes to waste, falling off of neighborhood trees and rotting on sidewalks and in backyards. The good news is that with an abundance of fruit trees, Salt Lake City is in a unique position to cut down on waste and provide affordable access to healthy food.

That’s how the Fruitshare program was born. Salt Lake City worked with the non-profit Green Urban Lunch Box (GULB) to launch this program several years ago with the goal of reducing food waste and providing healthy fruit to residents in need. SLCgreen has also supported the program financially until it became self-sustaining.

Since then the program has expanded beyond Salt Lake City, to include other areas along the Wasatch Front.

In 2017, volunteers with the Green Urban Lunch Box harvested over 50,000 pounds of fresh, locally grown fruit from local trees. Wow!

But they need your help to do even more.

What is the SLC FruitShare?

Instead of losing the fruit to the landfill, the SLC FruitShare will bring volunteers to harvest your fruit for you! If you have a tree or orchard that produces an abundance of fruit each year, you can register you trees and help strengthen our local food system.

Here’s how it works:

END_OF_DOCUMENT_TOKEN_TO_BE_REPLACED

Check Out this Interview with the SLCgreen Director

The Sustainable Nation Podcast interviewed our very own Sustainability Director -Vicki Bennett. Check out the podcast to hear insights and advice from the leader of our City’s award-winning Salt Lake City Green sustainability program.

The Sustainable Nation Podcast produces interviews with global leaders in sustainability and was developed to provide information and insights from the world’s most inspiring change-makers.

The interview gives listeners a glimpse of Vicki’s journey from a lab chemist to her current role as the leader of Salt Lake City Green. Vicki has forged some of the City’s most innovative programs to ensure a healthy sustainable future for us all. Give the podcast a listen to learn more!

Did you see the news about Salt Lake City’s grand opening of Fire Station 14 earlier this month?

We are thrilled our fire crews have a new home base from which to work, rest, and recover.

This building is also notable for its sustainability features.

It’s not just a model for the state of Utah, but for the country. In fact, Fire Station 14 is the first Net Zero energy fire station in the U.S! END_OF_DOCUMENT_TOKEN_TO_BE_REPLACED

SLCgreen‘s Division Director Debbie Lyons and Program Manager Tyler Poulson are presenting a webinar to a national audience on April 19th detailing Salt Lake City’s ambitious climate goals. Wondering how we’re getting to net-100% clean electricity? Sign up to listen live or to access the recording!

As part of that, we’re also excited to be featured in the Sustainable City Network magazine. We’ve included an excerpt here. 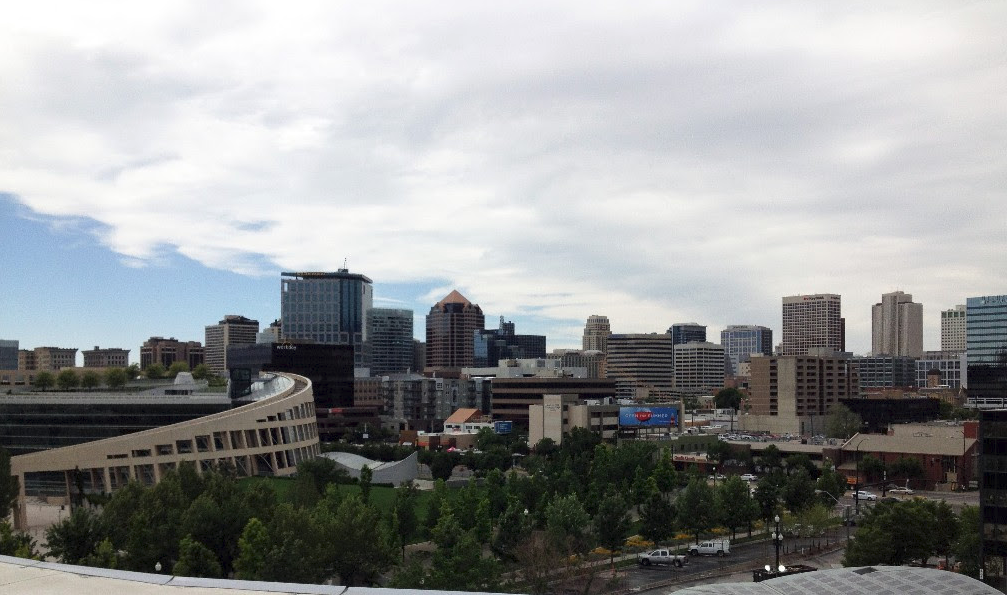 Sign up for our April 19 webinar “Moving the Needle Innovative Climate Solutions in Salt Lake City” at: http://bit.ly/2qoCSi3

Things are heating up in Salt Lake City, Utah. And not in a good way.

The city is located in a region of the U.S. that climate scientists say is warming at more than twice the national average. It would be bad enough if the only victim of that problem was the area’s $1.3 billion ski resort industry, but local leaders know the stakes are higher than that, as water reserves decline and air quality reaches dangerous levels.

As daunting as these threats appear, Salt Lake City’s municipal government has partnered with its local electric utility to make an historic commitment that could become a model for all communities facing the dire effects of climate change in the years to come. The city and Rocky Mountain Power have signed an agreement and drafted a plan to acquire all the community’s electricity from renewable sources by 2032, reducing emissions, saving water and improving air quality in the process.

Salt Lake City gets most of its water from snowmelt in the surrounding mountains, and the city’s water reserves are significantly below historical norms. Higher temperatures are also accelerating the production of ground-level ozone, an invisible, odorless gas that can cause permanent damage to the lungs. Last year the city’s air exceeded the federal ozone standard on more than 20 days.

City officials are bracing for more of the same.

“The climate models show us that we’ll probably get about the same amount of overall precipitation, but it’s going to be coming as rain rather than snow,” said Vicki Bennett, the city’s sustainability department director. That means more of the water runs off in the spring, making less of it available later in the year. She said rising temperatures tend to increase water demand, which only exacerbates the problem.

Last year the Salt Lake County Health Department released a Climate Adaptation Plan for Public Health, which warned of many other health concerns related to the rising temperatures and altered precipitation patterns caused by climate change.

Check out our Roadmap for Electrified Transportation! 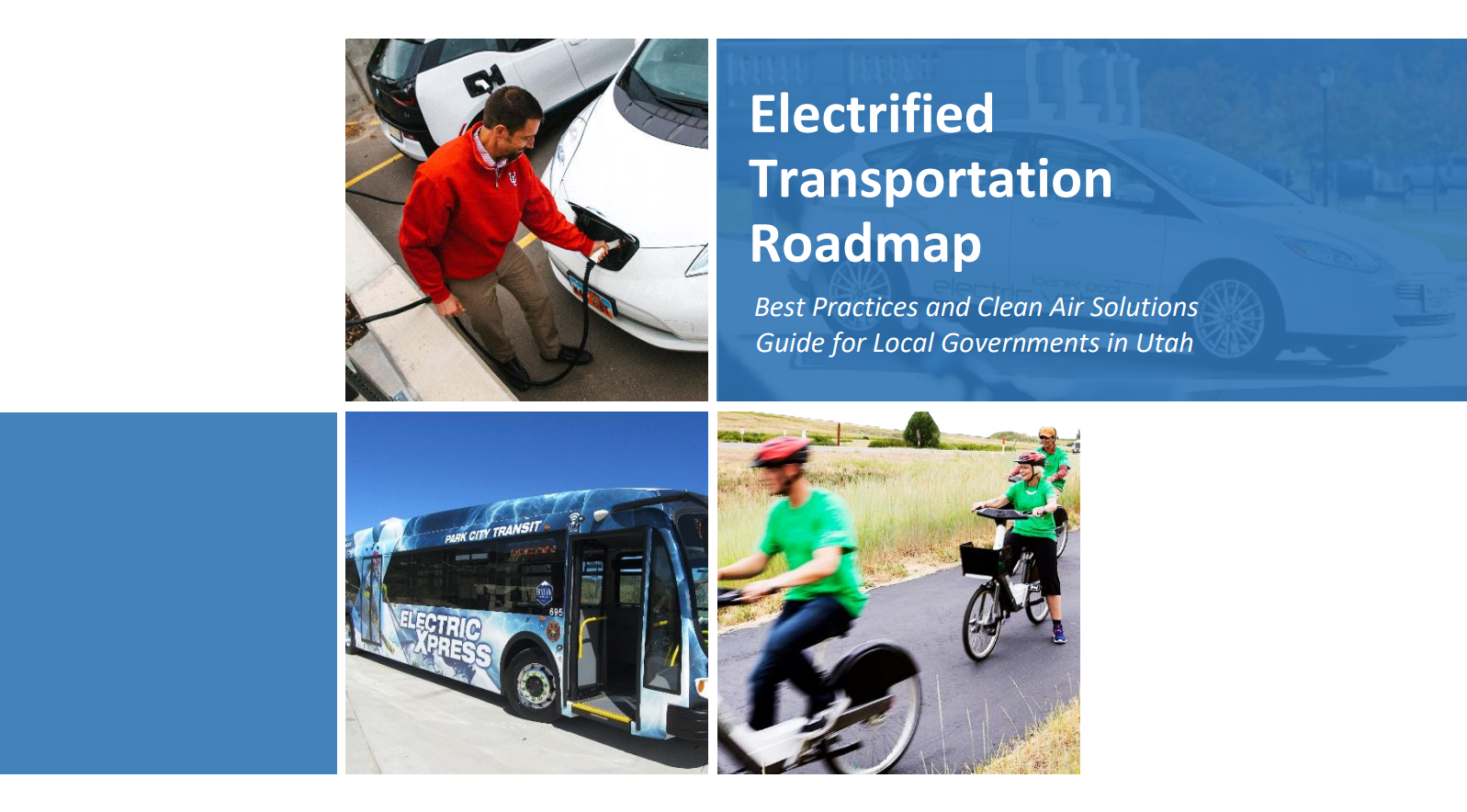 And, in many cases, the future is here. So local governments better get ready!

That’s why we’re excited to introduce you to a new report SLCgreen recently co-produced with Utah Clean Energy.

The Roadmap outlines how local governments can implement a variety of electric powered modes of transit including electric vehicles (EVs), e-bikes, electric transit, and electrified ridesharing.

Salt Lake City has integrated a number of these best practices into our internal operations, and we’re now working toward more community-scale projects as part of our Climate Positive SLC plan.

As the capital city’s sustainability department, we also believe it’s important to share what we’ve learned with other local governments.

That’s the idea behind the Roadmap—as well as a workshop we organized March 14 with representatives from 16 local governments across the Wasatch Front to talk about best practices and to view EV options from a variety of local dealers. END_OF_DOCUMENT_TOKEN_TO_BE_REPLACED

And the best news is that the stations will be available for use at no financial cost both to Packsize employees and the general public.

Rocky Mountain Power awarded Packsize International with a $111,280 incentive check to offset the cost of the Level 2 electric vehicle chargers. These EV incentives are available to any Utah company that wants to install charging infrastructure!

Packsize is a leader in sustainability and forging solutions to our local air quality problems.  It spearheaded the creation of a non-profit, Leaders for Clean Air, in 2015 to encourage businesses to install charging infrastructure. Because vehicles are the largest source of wintertime air pollution and EVs have no tailpipe emissions, incentivizing employees to make the switch to an electric vehicle by offering workplace charging is a tangible way businesses can get involved in promoting better air quality.

Leaders for Clean Air now has an alliance of dozens of businesses and has helped catalyze the installation of 184 workplace EV charging stations in the last two years.

At the ribbon cutting, Salt Lake City Mayor Jackie Biskupski, along with other Leaders for Clean Air founding members, provided updates on the clean air advancements and future goals for Salt Lake’s airshed. Leaders for Clean Air also presented a charging unit to Attorney General Sean Reyes, who spoke at the event.

END_OF_DOCUMENT_TOKEN_TO_BE_REPLACED

Path to Positive Utah brings together 40 inaugural leaders who have committed to discussing and forging local solutions to climate change in Utah.

Read more in the press release below!

The gathering kicked off Path to Positive Utah, a collaborative initiative sponsored by Utah Clean Energy and ecoAmerica, that represents a diverse group of leaders seeking to understand, prepare for and raise awareness about climate change risks and solutions.