“We are thrilled to be recognized as a one of the top U.S. communities leading out on climate change and climate action,” said Mayor Ralph Becker. “Over the past seven years, we have focused on developing a comprehensive portfolio of programs and policies that will cut carbon pollution and increase community resiliency in the face of our changing climate.”

In response to recommendations presented by the White House Task Force on Climate Preparedness and Resilience, of which Mayor Becker was an integral member, the White House launched the Climate Action Champions competition earlier this fall to identify and recognize local climate leaders and to provide targeted Federal support to help those communities further raise their ambitions.

Salt Lake City was recognized for the development of a comprehensive and well-integrated portfolio of programs and policies, including renewable energy, transportation, code revisions, water systems and building policies as priorities. The City established a joint resolution to reduce its carbon footprint by 20 percent below 2005 levels by 2020, and 50 percent below 2020 levels by 2040. Learn more about Salt Lake City’s commitment to climate action at http://dashboard.slcgov.com.

More information on the first cohort of Climate Action Champions is available at http://www.whitehouse.gov/the-press-office/2014/12/03/fact-sheet-16-us-communities-recognized-climate-action-champions-leaders. 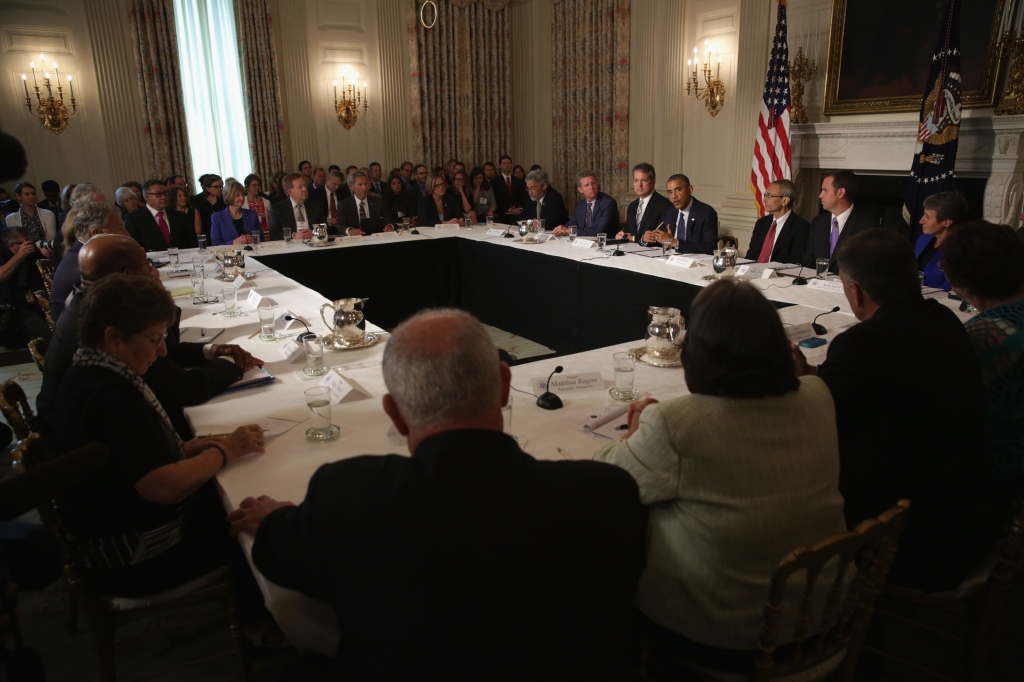 Over the past year, Salt Lake City Mayor Ralph Becker and Sustainability Director Vicki Bennett have participated in the President’s State, Local and Tribal Leaders Task Force on Climate Preparedness and Resilience. Today, the White House released the list of recommendations presented to the administration by the task force and executive actions already in the works. Read on for details!

As part of the Administration’s overall effort to combat climate change, President Obama is committed to ensuring that U.S. communities thrive in the face of a changing climate. The Administration has made significant investments in resilient disaster recovery in the wake of devastating storms like Hurricane Sandy, ensuring that rebuilding and infrastructure projects factor in climate impacts such as sea-level rise and investing in making transit systems more resilient to flooding and extreme weather.

Last year, as part of his Climate Action Plan, the President established the State, Local, and Tribal Leaders Task Force on Climate Preparedness and Resilience, which recognizes that even as we act to curb the carbon pollution that drives climate change, we must also improve our ability to prepare for the climate impacts we are already seeing across the country. The Task Force comprises Governors, Mayors, county executives and Tribal leaders from across the country who are experiencing climate change impacts ranging from more severe droughts and wildfires to record heat waves and damaging storms.  Task Force leaders have taken bold action to protect their communities by investing in more resilient infrastructure, updating building codes, adjusting the way they manage natural resources, and planning for rapid recovery from extreme weather events.

Today, at a meeting with Vice President Biden and Senior White House officials, Task Force members will present their recommendations for how the Federal Government can respond to the needs of communities nationwide that are dealing with extreme weather and other impacts of climate change. The Administration is also announcing new tools and actions to help these leaders and others contend with climate impacts and build healthy and resilient communities, including a web-based Climate Resilience Toolkit that provides for the first time easy, intuitive access to dozens of Federal tools that can directly help planners and decision makers across America conduct their work in the context of a changing climate.

Recommendations of the Task Force on Climate Preparedness and Resilience

The Task Force’s recommendations are the culmination of a year of work to solicit input from across State, local, Tribal, and territorial governments, trade associations, academic organizations, civil society, and various other stakeholders and translate their first-hand experiences into action items for the Federal Government to support climate-ready communities. The recommendations offer guidance on how the Federal Government should modernize programs and policies to incorporate climate change, incentivize and remove barriers to community resilience, and provide useful, actionable information and tools. The Task Force organized its report across seven cross-cutting themes: building resilient communities; improving resilience in the Nation’s infrastructure; ensuring resilience of natural resources; preserving human health and supporting resilient populations; supporting climate-smart hazard mitigation and disaster preparedness and recovery; understanding and acting on the economics of resilience; and building capacity.

This approach ensures that the recommendations reflect the diversity of needs across the country and within each community, ranging from health to natural resources management to infrastructure and building design. For example, the recommendations address how the Federal Government can limit disease spread that is caused or exacerbated by climate change through the development and enhancement of climate-sensitive health tracking and surveillance tools, and call on the Federal Government to integrate climate resilience planning and preparedness criteria throughout existing Federal programs, such as those that provide transportation funding, to ensure these projects will last as long as intended.

At today’s meeting, Task Force members will view a demonstration of the Administration’s new Climate Resilience Toolkit, which was called for in the President’s Climate Action Plan and developed with input from the Task Force. In addition to providing easy access to resources ranging from a tool that helps planners see which neighborhoods are likely to flood in future storm surges to a tool that shows how predicted future drought conditions would affect regional crop growth, the Toolkit presents more than 20 case studies that feature step-by-step examples of how real-world decision makers have used these tools, lessons learned, and best practices. The Toolkit, which is publicly accessible at toolkit.climate.gov, initially focuses on the topics of coastal flood risk and food resilience. In the coming months, it will be updated to address additional areas such as water, ecosystems, transportation, and health.  Some features of the Toolkit include:

In addition to the Toolkit, the Administration announced several other initiatives to support State, local, and Tribal climate resilience needs, including:

The Administration has previously taken additional actions to build National resilience based on input from Task Force members. This includes launching Federal competitions – like the $1 billion National Disaster Resilience Competition – that spur innovation and encourage investments in community resilience, new funding to support tribes prepare for climate impacts, and making vast Federal data resources on climate change impacts more accessible to decision-makers, innovators, and the public through the Climate Data Initiative.  The Administration is also taking steps to ensure that public investments – whether in transportation systems, infrastructure, or natural resources – are made with future conditions in mind, and has ensured Federal agencies ranging from the Department of Health and Human Services to the Department of Homeland Security are actively incorporating climate resilience into their missions and operations. Going forward, the Administration will continue to collaborate with Task Force members and other community leaders from across the country to build a healthier and more resilient Nation. 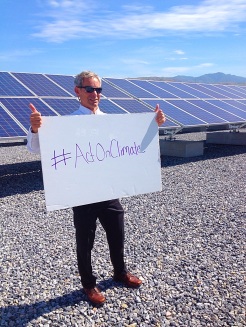 Over the last nine months, Salt Lake City Mayor Ralph Becker and Salt Lake City Green Director Vicki Bennett have participated in the White House’s State, Local, and Tribal Leaders Task Force on Climate Preparedness and Resilience, which was tasked with advising President Obama on how the Federal government can best respond to the needs of communities nationwide already dealing with the impacts of climate change.

The task force, made up of 26 officials from across the country, is holding its fourth and final meeting today in Washington D.C. Formal recommendations will be delivered to the President in the fall.

Today the President is announcing a series of actions to respond to the Task Force’s early feedback to help state, local, and tribal leaders prepare their communities for the impacts of climate change by developing more resilient infrastructure and rebuilding existing infrastructure stronger and smarter. See below for full details.

And check out this SLCgreen blog story about how the City is leading the way with solar!

FACT SHEET: Taking Action to Support State, Local, and Tribal Leaders as They Prepare Communities for the Impacts of Climate Change 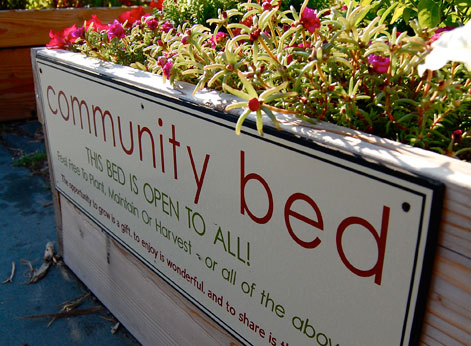 How does the availability of wholesome and affordable food impact the health of our community? This is the question that Salt Lake City Green and the Mayor’s Food Policy Task Force took on when they began the Community Food Assessment.

Stayed tuned for more in depth coverage of key findings from the report, including next steps.

In the meantime, read the draft report. 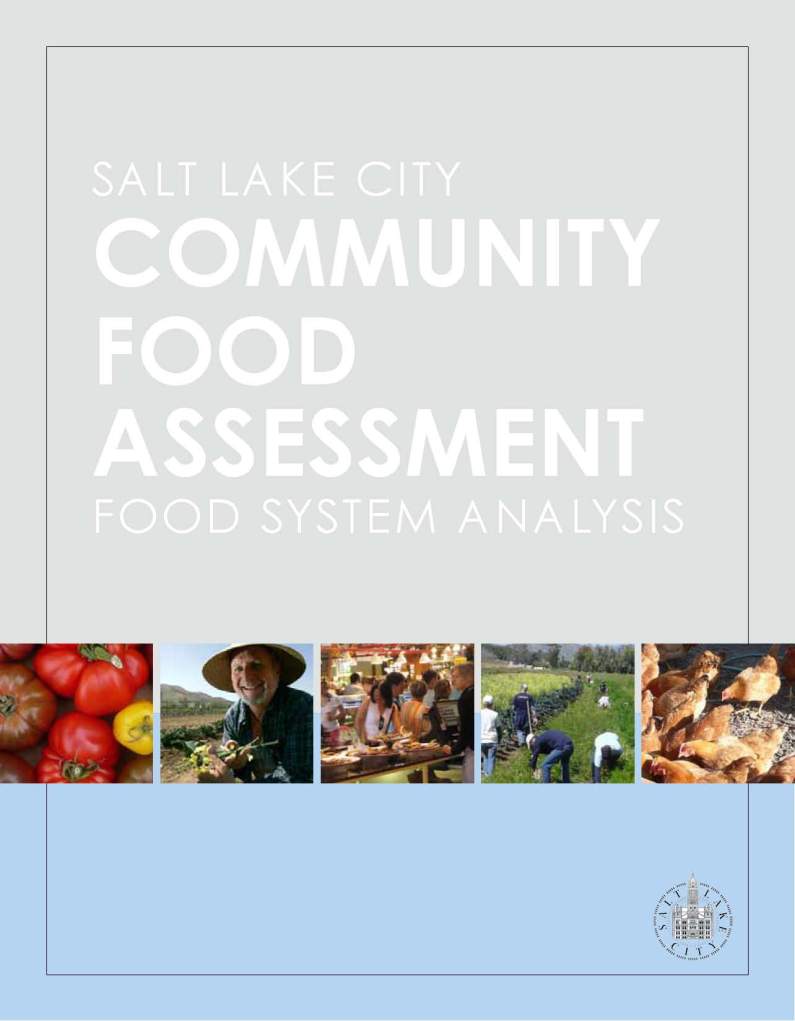