Composting is the most local form of recycling. Not only does it help us create a closed loop by turning food and yard waste into new soil, composting helps keep our yards happy and healthy.

Compost puts yard and table scraps to work. By adding important nutrients to the soil and improving water absorption, compost can improve the overall health of your garden. As a result, compost helps reduce the need for harmful pesticides and even helps fight climate change.

Compost is a wonderful tool to keep our yards healthy and reduce waste. This is why the Composting Council’s Research & Education Program has celebrated International Composting Awareness Week for 25 years! This week, from May 3 – May 9, join us in celebrating compost!

END_OF_DOCUMENT_TOKEN_TO_BE_REPLACED

Spring is here! While many of our normal spring activities are cancelled this year, there are still plenty of ways to enjoy springtime in Utah and do your part for the planet.

Maybe you’re a skilled gardener, or maybe you want a new hobby to brighten up your front yard. Whatever the case may be, one of the best ways to go green from home is to make a home for pollinators.

Make Your Yard a Monarch Waystation

The migratory monarch butterflies help pollinate natural spaces across the country. Sadly, habitat loss has lead to a rapid decline in monarch populations that mirrors declines in other pollinator species. In the Rocky Mountains, the monarch butterfly population has declined over 97%.

However, we can help monarchs by giving them their favorite plant: milkweed. Monarchs love milkweed. In fact, it is the only plant that monarch caterpillars eat. Without milkweed, monarchs cannot survive. You can help protect monarchs and other pollinators by creating a monarch friendly habitat or waystation in your yard.

In Utah, the Showy Milkweed and Swamp Milkweed are the most common milkweed species. Adult monarchs and other pollinators also benefit from having other native nectar-rich plants around. You can order milkweed seeds from Save Our Monarchs or your favorite seed seller. Find more information about Utah’s native plants here!

Another way to support monarch conservation is by becoming a Citizen Scientist. Help track milkweed and monarchs throughout the state and contribute to our scientific understanding of monarch populations and habitats. By protecting monarchs, we support biodiversity in our local environments.

END_OF_DOCUMENT_TOKEN_TO_BE_REPLACED

Winter is coming to a close as we begin to pack away our heavy coats and gloves. We may be sad to see the skis go back into the basement, but soon we’ll bring out the mountain bikes and hiking shoes. And as the temperature begins to rise we can head back into our gardens and yards.

Our trees and plants have been snoozing the winter away and it is time for them to wake back up. Just like us, our trees are a little groggy and sleepy, from their long nap. The harsh elements of the winter have damaged and weakened their branches and stems. This makes them even more susceptible to pest invasion. Nonetheless, with a little tender loving care we can help rejuvenate our trees, keeping them strong, happy, healthy and pesticide free.

Join our #PesticideFreeSLC campaign and pledge to keep our yards healthy and our bodies safe! Check out our resource guide for tips and visit our past blogs on organic landscaping to get started.

END_OF_DOCUMENT_TOKEN_TO_BE_REPLACED

Go Batty for Bats this Halloween!

Halloween is here and things are getting extra spooky. Whether you’re out trick-or-treating, carving pumpkins, or just enjoying the fall weather, take a minute to celebrate some of Halloween’s most iconic creatures: Bats!

While bats may seem scary, like spiders they are an important part of our ecosystems. Not only do they help control insect populations, reducing the need for pesticides, they are also major pollinators.

It just so happens that Halloween marks the last day of International Bat Week. So in honor of our winged friends, here are some fun facts about bats.

There are eighteen species of bats in Utah, and over 1,300 species world wide. Bugs make up the primary diet of most bats. And a single bat can eat thousands of insects each night! For smaller bats, that can mean eating close to their body weight in insects!

By controlling insect populations, bats help reduce the need for toxic pesticides. As a result, bats also help farmers save money by serving as natural defenses against insect damage to crops. Moreover, by diminishing our dependence on pesticides, bats also help protect our food and health.

While most bats are insectivores, many species consume nectar and fruit – and are important pollinators! Indeed, bats are responsible for pollinating over 300 species of fruit including bananas and mangoes. They also help pollinate the plants that are used to make different kinds of medicine.

One common misconception about bats is they are blood-suckers. Although the vampire bat does consume the blood of other animals, bats don’t attack humans. Bats can carry rabies and other diseases, so it is important to remember that handling bats isn’t safe for you or the bat.

Besides habitat destruction, one of the biggest threats to bats is White-Nose Syndrome, a fungus that is causing mass deaths of hibernating bats. You can lower their chances of exposure by avoiding caves where there may be hibernating bat colonies.

Bats are wonderful animals who play an important role as pollinators and insectivores. By giving bats space and protecting their habitats, we can keep humans and bats safe!

Please join us in celebrating the role of bats in our ecosystem by commemorating Bat Week! Share this blog or Bat Week’s page on your social media pages.

Or perhaps you have your costume dilemma solved for Halloween? . . .

Whatever it is– let’s show the bats in our environment some love!

Since last spring, little green hexagonal signs have been blooming in Salt Lake City gardens. These Pesticide Free Yard signs are part of the Salt Lake City Pesticide Free Campaign in partnership with Healthy Babies Bright Futures (HBBF). HBBF encourages residents to protect our families and the environment by eliminating pesticide use.

Salt Lake City’s Sustainability Department teamed up with Beyond Pesticides to guide residents who want to keep their gardens beautiful without using harmful chemicals. And it’s working! Since 2018, over 340 individuals have pledged to go pesticide free.

And even though summer is coming to a close, you can still go pesticide free in your yard. Eliminating your use of toxic chemicals is a year-round challenge that will protect your family and neighborhood.

END_OF_DOCUMENT_TOKEN_TO_BE_REPLACED

Join Us for a Family Field Day on April 13!

On April 13, Stonyfield Yogurt will host a “Field Day” of fun-filled family activities for the general public to enjoy, which celebrates a new program and collaboration with the City.

Bouncy houses, games, music, free organic yogurt and other activities will be located between playing fields at the Regional Athletic Complex and are open to all. Education about organic field maintenance will also take place at a fun “Edutainment Cart” featuring interactive and educational activities for kids and parents.

At 1 pm Mayor Jackie Biskupski will receive a donation of $5,000 from Stonyfield Organic yogurt to support the Pesticide Free SLC program. It will be used to convert two fields at the Salt Lake Regional Athletic Complex (RAC) to organic land care maintenance methods.

The company will also pledge an additional $40,000 to cover technical services to implement and identify best management practices that could be scaled up at the RAC, with the goal of making it the first sports complex in the nation with professional-grade fields being maintained through organic maintenance practices.

What: “Field Day of Fun!” to Celebrate Organic Land Care with Stonyfield Organic

The initiative is aimed at reducing overall chemical use in the Salt Lake City community and includes both a municipal and public focus. Building off the best management practices already employed by the Parks Division for the maintenance of all municipal parks and fields, the City has been piloting organic land care methods at both Laird and Madsen parks since 2017.

The support of Stonyfield will give Salt Lake City its largest organically-maintained lawn areas to date, with the focus on high-visibility and heavy-use spaces.

END_OF_DOCUMENT_TOKEN_TO_BE_REPLACED 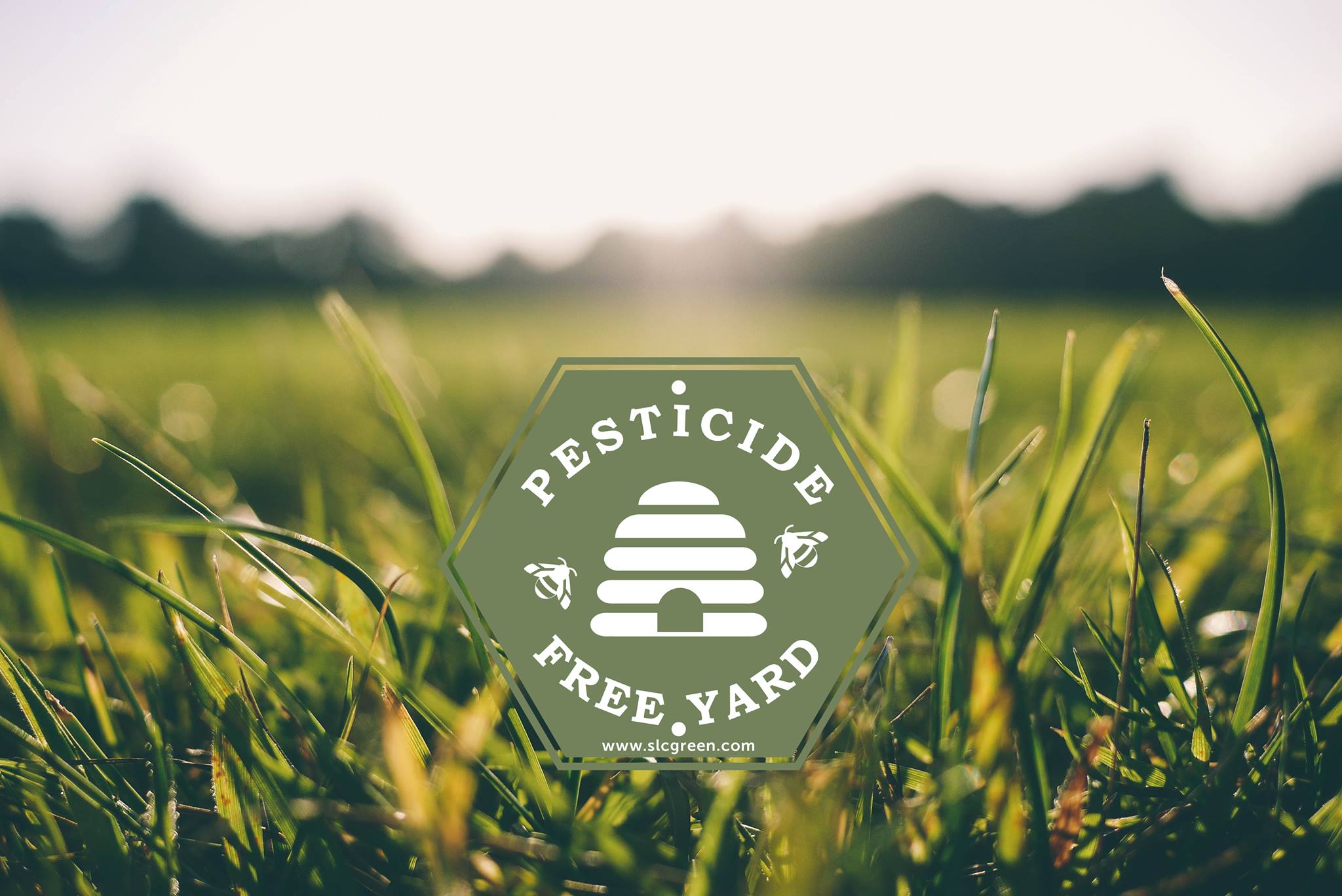 As you may know, Salt Lake City has partnered with the Healthy Babies Bright Futures alliance to conduct an assessment and implement approaches to reduce exposure to certain chemicals deemed most risky for babies in their first 1,000 days of development.

One of the ways we’re doing that is by piloting organic turf management at two Salt Lake City parks, with the goal of adding more City properties.

Now we’re asking you to join us! Take the pledge to be Pesticide Free in your landscaping. You’ll get a yard sign, as well as a helpful toolkit for how to use organic methods at your home or businesses.

“Pesticide Free SLC” is a public campaign to educate and encourage Salt Lake City residents and businesses to phase out chemical pesticide, herbicide, and fertilizer use from their landscaping. END_OF_DOCUMENT_TOKEN_TO_BE_REPLACED