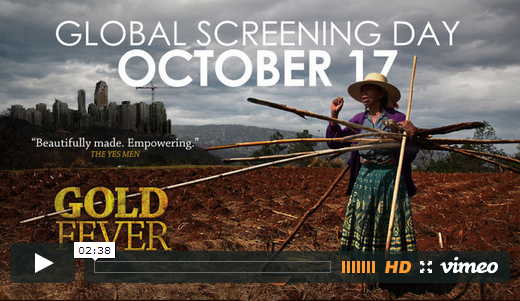 Tragic and inspiring, Gold Fever witnesses the arrival of Goldcorp Inc to a remote Guatemalan village. 500 years after the conquistadors invaded, and still reeling from decades of US-backed repression, the Mayans of San Miguel Ixtahuacán find themselves on the front lines of an increasingly globalized world. Together with members of their divided community, and in the face of grave consequences, Diodora, Crisanta and Gregoria resist the threat to their ancestral lands.

Meanwhile, in the North, fearful investors flock to gold and some call for the return of the gold standard. Commentators Noam Chomsky, Magalí Rey Rosa, and “economic hitman” John Perkins draw connections between the stratospheric power of Wall Street and San Miguel’s struggle, asking “what is the value of the one place we have to live?”

Winner of the Rigoberta Menchú Grand Prix at the 2013 Montreal First Peoples Festival, Gold Fever is a hard-hitting documentary about the destructive and exploitative impacts of transnational mining.