Salt Lake City Green, in partnership with the Utah Film Center and the Salt Lake City Public Library, are excited to announce a special screening series of the groundbreaking Showtime series, Years of Living Dangerously.

The free film screenings will be held on the first Thursday of each month beginning at 7:00 p.m. at the Salt Lake City Main Library Auditorium. A local speaker panel will be featured following each screening.

The first screening is scheduled for November 5, 2015 and will feature Susan Soleil of Utah Interfaith Power and Light. Today is World Food Day. World Food Day is a day of action against hunger. On October 16, people around the world come together to declare their commitment to eradicate hunger in our lifetime. Because when it comes to hunger, the only acceptable number in the world is zero.

Reducing food waste is an important component of climate action at home and worldwide.

So what can you do? Here are the recommendations from the United Nations Environment Programme, Regional Office of North America:

Think. Be a smart shopper and think about what you are buying and when it will be eaten. Wasting food is often a subconscious act – become aware of how much food you throw away. Plan meals and use shopping lists. Bring your leftovers home from restaurants in reusable containers.

Save. Save your food, save your money and save the environment. Donate to food banks and become a conscious consumer.

On Sunday, October 18th at 8:00 a.m. SLCgreen’s Bridget Stuchly and Tyler Poulson will present at the World Parliament of Religions. Their presentation, Dining with Discretion: Food Choices Matter, outlines how personal choices about what and how we eat impact our environment and can either contribute to, or help alleviate, climate change.

Dining with Discretion from SLCgreen

Long story short, there are some very real steps you can take in your everyday eating habits that will have a positive impact on the environment:

The program engages employees who have expressed an interest in professional development and leadership skills related to sustainability. Participants attend interactive monthly meetings and build momentum for more effective and strategic action on climate change across all City departments. 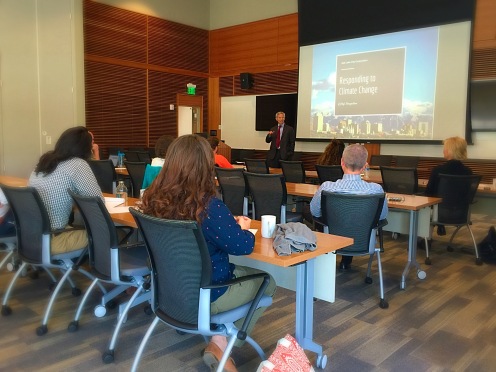 Climate action starts with you! Here are five simple actions you can take today to begin reducing your climate impact.

Heating water consumes a lot of energy – 90% of the total needed to wash your clothes – always use a cold-water setting and detergent.

2. Replace Your Furnace Filter and Manage Your Thermostat

Every degree F saves 3% on cooling / heating – set to 60 at night or unoccupied during winter and 78 in summer.  Dirty furnace filters waste energy and should be changed every three months.

3. Properly Inflate Your Tires and Ride with Hive

Regularly check and inflate your tires to improve MPGs by 3% – more tips to save fuel at FuelEconomy.gov.
SLC residents, visit RideWithHive.com for details on the City’s discounted transit pass.  Just $42 / month, a 50% discount, gets you unlimited rides on the bus, TRAX and S-Line.

5. Use Reusable Water Bottles and Mugs – Plus, Downsize Your Garbage Can

Manufacturing bottles, cans and other drink containers takes energy and creates emissions.  Reduce your footprint and save cash by using reusables.  SLC residents should Google SLCgreen for many more waste tips and additional ways to save, like downsizing your garbage can.  Moving from a 90-gallon bin to a 40-gallon bin will save you $87 / year on your trash bill.  There is also a 60-gallon option that will save you money.

Under Mayor Ralph Becker’s leadership, Salt Lake City has taken a proactive approach to climate preparedness and resilience. Learn more about the City’s accomplishments and goals on SLCgreen.com.

In March, Mayor Becker was invited to contribute to the White House Blog, touting the progress made right here in Salt Lake City as a national example of success. View “Local Climate Action Takes Center Stage at the National League of Cities Conference.” 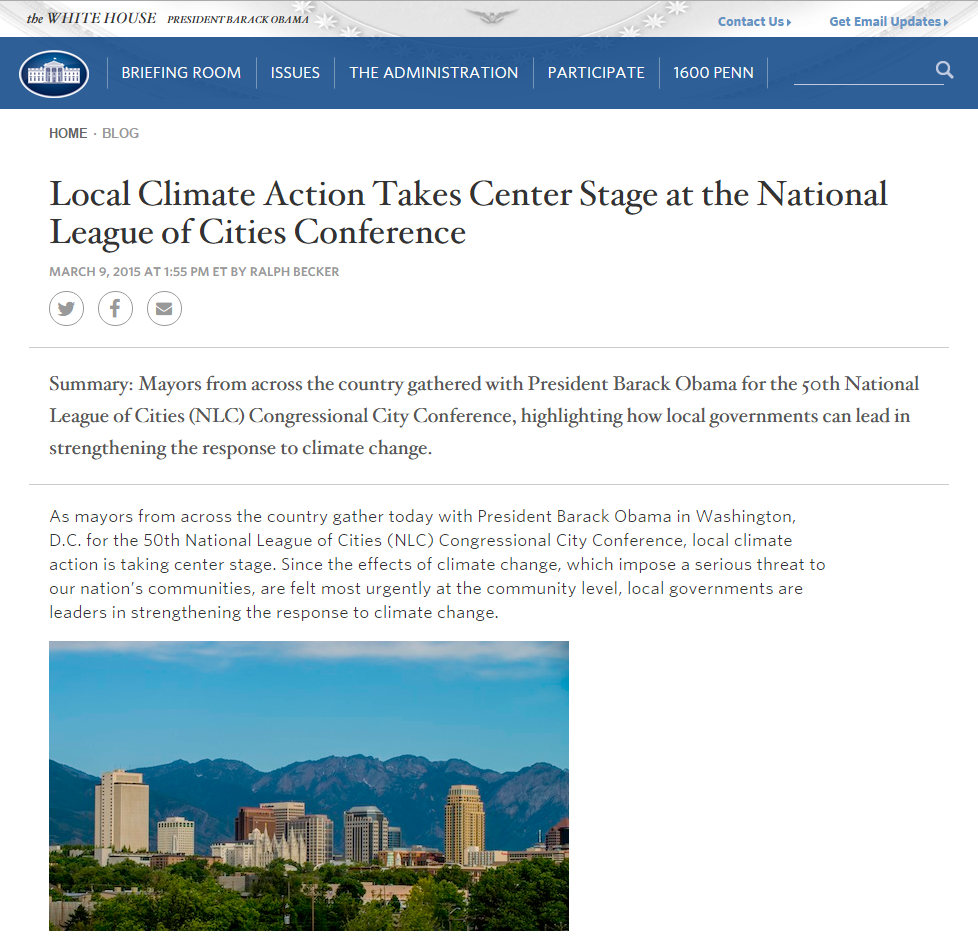 Yesterday, ABC 4 News stopped by Salt Lake City Green to get the scoop on Climate Week — what the City is doing to reduce its impact and what you can do to get started! It’s a fantastic story. Click on the video above to watch the story on Good4Utah.com.

SALT LAKE CITY (ABC 4 News) – Salt Lake City officially kicked off its first ever Climate Week. The initiative is designed to increase awareness about the local realities of climate change, what the city is doing to prepare for the future and what residents can do to reduce their impact at home.

No matter your stance on climate change, it’s undeniable Utah is heating up.

Salt Lake City’s Sustainability Program Manager Tyler Poulson explained, “In Utah in recent decades temperatures have been increasing about twice the global average and its certainly something that’s not gone unnoticed in Salt Lake City.”

“We’re having monthly workshops for about 26 employees from all departments so airport, fire, police, water and everything in between, and we’ve been learning about climate change, its impact locally and how to make a difference,” said Poulson.

Leaders in that group came up with Climate Week to share what they’ve learned with the community. They say there is five easy steps residents can take to reduce their carbon footprint by about 5,000 pounds of CO2 emissions a year, and even save some money about $500 a year.

Some other actions Poulson suggests, “Keeping your tires fully inflated, or if you’re a Salt Lake City resident checking out the Hive pass for public transit. Some other actions include changing out your lightbulbs to LEDs, they’re really energy efficient and starting to look great, and then also downsizing your trash can and using renewables.”

Dr. Robert Davies with the Utah Climate Center discusses the science of global climate change in his compelling 30 minute presentation, “Earth’s Changing Climate”.  The presentation focuses on the physical phenomenon, our understanding based on observation and measurement. Here are a few highlights:

While Earth’s climate does change naturally, the changes we’re seeing today are unique in Earth’s climate history.  The Earth is warming and not as part of a natural cycle. Why?

Greenhouse gases, like carbon dioxide are increasing in the atmosphere through burning fossil fuels at an ever accelerating rate. As a result, energy is trapped, raising the Earth’s temperature.

Specifically in Utah, temperatures have been rising at about twice the global average over the past 40 years.

The answer, however, is yet to be determined and lies in the choices we make.

Watch the full presentation here. If you want to skip ahead to Utah-specific information, start watching at 14 minutes 30 seconds.

As part of Climate Week, the inaugural class of Salt Lake Climate Leaders have been working within their City departments to promote actions that will have a positive impact on the City’s carbon footprint.

This is the first showcase to feature products that will help City departments save energy, reduce their carbon footprint and increase energy consciousness.

Some of the technologies featured include:

Learn more about Climate Week and how you can get involved at SLCgreen.com.

Climate Week: What SLC is Doing to Combat Climate Change

Salt Lake City has been recognized as a Climate Action Champion for showing leadership on climate change. The accomplishments of Salt Lake City in the past seven years demonstrate a commitment and successful track record of innovation and leadership to integrate the reduction of greenhouse gas (GHG) emissions and enhance climate resilience into local and regional planning and decision-making.

Here are some of the City’s climate actions, goals, and key initiatives: