We’re excited to announce Utah’s first Climate Week, with events from Ogden to Orem and here in the capital city!

Organized by the Utah Climate Action Network, Utah Clean Energy, and Salt Lake City, Climate Week will provide an inspiring opportunity for community members to learn of the risks and breakthrough solutions to climate change.

Click here for a full list of events, and take note of an interesting panel we’ll be part of on October 12: Utah’s Clean Energy Future.

Mayor Biskupski will offer opening remarks on our Climate Positive goals and SLCgreen team member Tyler Poulson will participate on the panel discussing what cities in Utah are doing to transition to clean energy. Other panelists include HEAL Utah, the Sierra Club, and Rocky Mountain Power. Utah Clean Energy will moderate the discussion.

Learn more in the press release below.
END_OF_DOCUMENT_TOKEN_TO_BE_REPLACED

With all of the storms, hurricanes, and wildfires hitting our country this fall, we need to take the opportunity of September being Emergency Preparedness Month to prepare for and mitigate climate change.

Read the op-ed published in The Salt Lake Tribune from Salt Lake City’s directors of Sustainability and Emergency Preparedness.

By Vicki Bennett and Cory Lyman

While Utahns traditionally take important measures to prepare for sudden natural disasters such as earthquakes, we also need to think about taking mitigating action for climate-related events such as extreme flooding, changing water supplies, wildfire and heat waves.

This need is amplified by the awful pictures we see of Hurricane Harvey and Irma and the destruction they have wrought. In Texas alone initial estimates are putting the damage at over $180 billion – that is billion, with a “b” – and we can’t start to comprehend numbers like that.

Scientists have been warning us for years that a warming climate increases the strength of storms like these — larger, powerful and devastating to our communities.

One month before Harvey hit, Salt Lake City experienced our own 200-year storm. .

CONTINUE ON THE TRIBUNE’S SITE. 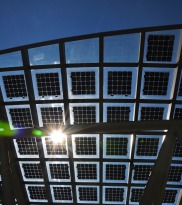 On Monday, the Governor’s Office of Energy Development issued news that a significant agreement had been reached between parties previously at odds over how to move forward with rooftop solar development in Utah.

The main point of contention was how to compensate rooftop solar owners for the excess electricity they sell back to the utility. In November 2016, Rocky Mountain Power proposed a change in their rate structure that could make it more difficult for homeowners to afford solar panels.

Because Salt Lake City is committed to advancing clean energy and supports the growth in rooftop solar, we opposed the proposed changes to the rate structure. In other states, notably Nevada, where similar changes have taken effect, the solar industry has imploded.

At about the same time, the Governor’s Office of Energy Development stepped in, outside of the formal Public Service Commission process, to try and broker an agreement on this thorny issue. END_OF_DOCUMENT_TOKEN_TO_BE_REPLACED

Salt Lake City’s Public Safety Building is the first Net Zero facility of its kind in the country. Even so, energy benchmarking and tune-ups helped us realize even more dollar and emissions savings.

Did you know that our buildings, homes, and small businesses contribute over a third of the pollution that obscures the valley during the winter?

Also known as “area sources,” this sector is the second-largest source of emissions and is forecasted to become the largest one in the coming years (as cars continually get cleaner due to federal regulations).

This is why everything we can do to reduce emissions from our homes and buildings can make a difference to our environment and public health.  It’s also why the City is focused on educating residents and businesses about the crucial role of efficiency to our airshed and to our carbon footprint. To this end, we provide guides for home improvements, including details on thermostat controls, home insulation and efficient appliances to help move residential buildings toward a cleaner energy future.

Our skyline’s largest buildings also have a role to play. While there is no “silver bullet” for wiping away all of Salt Lake City’s air pollution problems, the city’s commercial buildings can help simply by measuring their energy usage and making efficiency improvements where feasible. END_OF_DOCUMENT_TOKEN_TO_BE_REPLACED 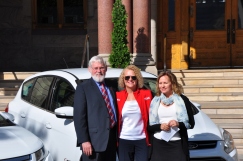 In a joint press conference, the University of Utah and Salt Lake City today announced the launch of an electric vehicle purchase program extending discounts on multiple makes and models of vehicles. The second round of U Drive Electric offers U community members and Salt Lake City community members the opportunity to purchase or lease electric and plug-in-hybrid vehicles at discounted prices through Oct. 31, 2016.

This joint program is aimed at improving air quality and community health both today and for future generations. With almost 50 percent of Utah’s urban air pollution coming from tailpipe emissions, electric vehicles represent an important tool for improving air quality along the Wasatch Front.
END_OF_DOCUMENT_TOKEN_TO_BE_REPLACED

The SLC City Council and elected officials from the other two communities recently adopted an Interlocal Agreement that commits the municipalities to collaborate and jointly fund a feasibility study. The study will evaluate renewable energy options, impacts, and opportunities to create a cleaner electricity supply for the long-term.

More clean energy on the way!

The Interlocal Agreement reiterated what many of us already know–that energy choices have a notable impact on public health, including the economic and social well-being of current and future residents.  The Agreement also noted that Utah has an abundant supply of solar energy, being one of the 10 sunniest states in the U.S., and that a recent report from The Solar Foundation revealed that there are already over 2,500 solar jobs in Utah.

The communities are jointly seeking a firm to provide technical assistance and a feasibility report this year. Summit County has published a Request for Proposals.  Results of the study could be available as early as late 2016.

Transitioning to renewable energy is essential for the City to meet its climate and air quality goals. Emissions from electricity generation create over 50 percent of the Salt Lake City community carbon footprint and over 75 percent of the carbon pollution from local government operations.

Mayor Biskupski recently set a goal of 100 percent renewable energy for electricity used in government operations by 2032.  This new partnership with Park City and Summit County includes an expanded scope to help us get there.  As a whole, the study will evaluate clean energy options for the entire community, including all homes and businesses.

“I signed this brief on behalf of Salt Lake City because the effects of climate change are real, but so are the solutions,” said Mayor Biskupski. “The EPA estimates that the Clean Power Plan will reduce the pollutants that contribute to smog by more than 25 percent, a change that will benefit everyone along the Wasatch Front, especially during our increasingly dangerous winter inversion season.”

The brief, filed in federal court today, argues the administration’s plan is critical to the safety and economic security of local communities across the United States. Signatories of the brief represent a diverse geographic, economic, and political mix. In all, the signatories represent 51 localities, home to more than 18 million Americans.

“Climate change challenges our very way of life in Salt Lake City. Increasing temperatures and a shorter winter season are resulting in less snow, threatening not only our billion dollar ski industry, but the water we need to keep up with our population growth,” said Mayor Biskupski. “My administration is committed to strengthening our actions in cleaning our air. This week I asked our city’s Department of Sustainability to work with mayors and cities across the Wasatch Front to provide any resources we can to help them join this fight.”