February is (finally!) here! And that means that the Clear the Air Challenge has begun!

In the last few years, Utahns have worked together to improve air quality in the Salt Lake Valley. Early last year, the EPA announced Salt Lake City and Provo were in compliance with federal standards for PM 2.5, the fine particulate matter that pollutes our air quality along the Wasatch Front. This significant milestone came after years of community wide work to take action to clear the air.

The COVID-19 pandemic changed our air quality, too. Efforts to flatten the COVID-19 curve resulted in considerable reductions in PM 2.5 and other air pollutants, up to a 59% reduction in particulate matter by May 2020.

In 2020, we learned that the steps we took to slow coronavirus cases resulted in quick changes to our air quality. COVID-19 continues to threaten our community’s health and economic security, resulting in increased social inequities. Many of the changes we’ve made in this crisis are not sustainable in the long term. However, our work to improve Salt Lake City’s resiliency includes taking actions that support public health and security, and that address environmental issues like air quality.

This month, we challenge Salt Lake City community members to participate in the 12th annual Clear the Air Challenge! The Clear the Air Challenge is a chance to level up your efforts to improve air quality. The Challenge runs the entire month of February, chosen due to the seasonal inversion that makes wintertime air quality especially bad. However, the steps you take this month can make a difference for our air all year long.

For many of us who are still spending more time at home, the challenge will feel a little different this year. We’ve put together some helpful facts, tips, and inspiration to get you going on the 2021 Clear the Air Challenge!

END_OF_DOCUMENT_TOKEN_TO_BE_REPLACED

Interested in learning how to help clean Utah’s air while having a great time??

There will be projects for kids, workshops for adults, and the chance to win some great clean air prizes like an electric snowblower or solar oven!!

So swing by! (Perhaps before or after a visit to the Winter Farmers Market down the street?)

Check out local vendors, information booths, and educational workshops. SLCgreen will be there, so stop by to say “hello!”

Where:
The Gateway
(The former Hall of Breakfast and Urban Outfitters)
18 N. Rio Grande St

Everyone is encouraged to take public transportation to the fair – can’t wait to see you there!!

Summertime . . . and the Air is Nasty

We’re all used to winter smog here along the Wasatch Front, with brown haze moving in and obscuring the mountains. But there is another pollutant in the valley, invisible but no less dangerous — ozone.

Ozone, a molecule consisting of three oxygen atoms, is created when nitrogen oxide (NOx) and volatile organic compounds (VOCs) mix and are heated by the sunlight.

NOx and VOCs are typically emitted by motor vehicles, but they can come from consumer products as well as industrial sources. (Read more about how ozone forms.)

Ozone is often found in the Earth’s stratosphere, where it plays a beneficial role by protecting us from damaging rays. But when ozone sits in the atmosphere where we can breathe it in, it can be very damaging to our health.

END_OF_DOCUMENT_TOKEN_TO_BE_REPLACED

We’re excited to let you know the winners of the SLC Corp 2018 Clear the Air Challenge. You may recall that this year we organized an internal bracket between SLC Corp departments to complement the statewide competition.  The internal winner of the most brackets would ultimately win the “Mayor’s Cup” for their efforts.

END_OF_DOCUMENT_TOKEN_TO_BE_REPLACED

Help Clear the Air! Sign up for the February Challenge

Transportation emissions are responsible for nearly 50% of the pollutants that make up our poor air quality. These pollutants become a serious concern during the winter months when normal atmospheric conditions (cool air above, warm air below) become inverted. This allows the air quality in the valley to become filled with particles that can quickly become unhealthy.

While there is much work being done to reduce those emissions (better transit, cleaner vehicles, more active transportation), the fact is– we can and should all help. We can each be a #CleanAirChampion.

There are many ways to participate! They all help the air and give you points in the Challenge:

It all adds up! 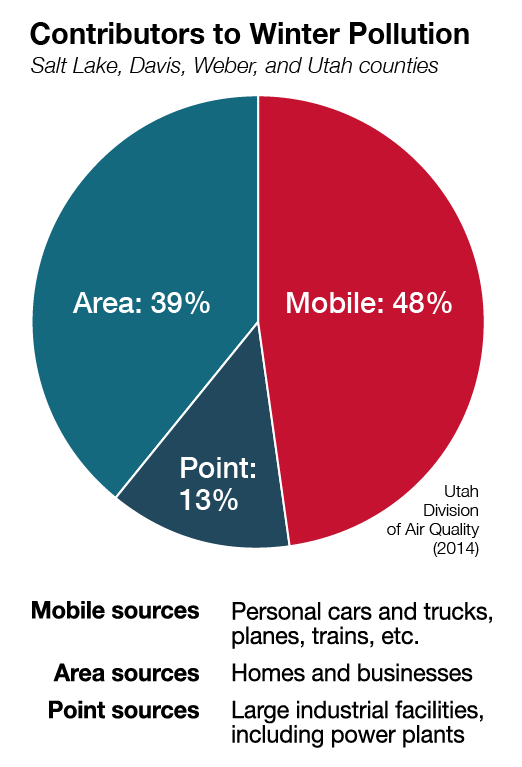 The Utah Division of Air Quality estimates that if every driver along the Wasatch Front were to give up driving for just one day per week, it would keep 6,500 tons of emissions (or 85 times the weight of the International Space Station) out of our airshed.

END_OF_DOCUMENT_TOKEN_TO_BE_REPLACED

Do you hate bad air days? We do too. Luckily, there are more and more options for cleaner transportation in Salt Lake City from Ride With Hive to the Live Electric EV & E-Bike discount program, a deal worth looking into if you have ever considered purchasing an electric vehicle.

END_OF_DOCUMENT_TOKEN_TO_BE_REPLACED

How to Improve Summertime Air Quality

Many of us associate bad air– yucky inversions and hazy gunk– with winter in the Salt Lake area. But did you know that we have bad air days in the summer too?

While it’s mostly invisible, ozone is just as harmful as particulate matter for the very young, very old, those with health conditions, and people who exercise outdoors.

Ozone is caused by emissions from vehicles, industry, and a multitude of chemical products which interact with sunlight and high temperatures.

So how can we reduce ozone?  END_OF_DOCUMENT_TOKEN_TO_BE_REPLACED 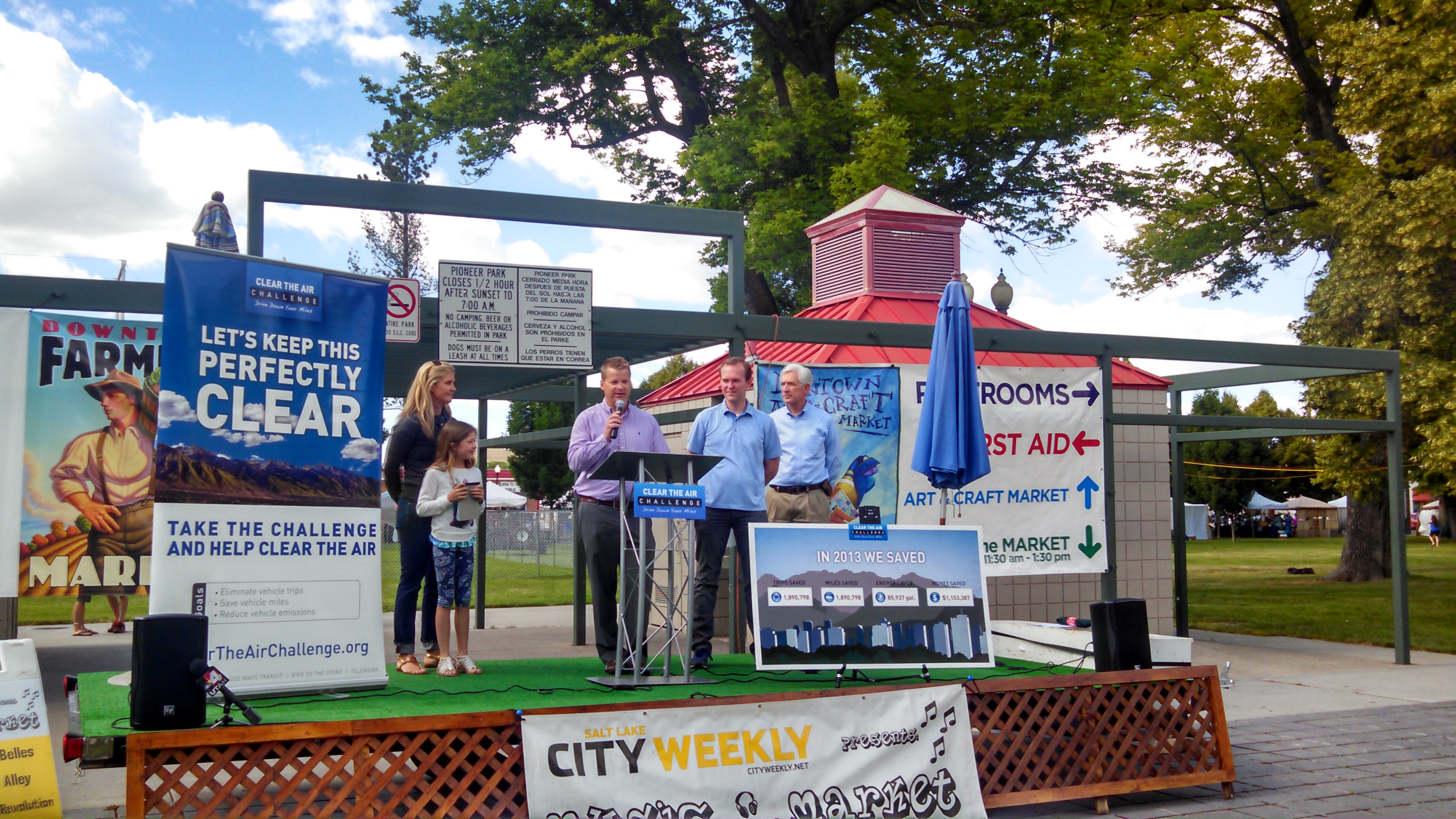 The 2014 Challenge kicked off at the Downtown Farmers Market on Saturday, June 14.

Are you ready to help clear the air? The 2014 Clear the Air Challenge starts next week on Tuesday, July 1!

The month long Challenge is just that — an excellent way to challenge yourself to “drive down your miles” and reduce your emissions. Choose alternatives to driving alone and track your impact on air quality.

(And keep an eye on the leader board for the Salt Lake City Corporation network, which is SLCgreen’s home team!)

This year there is a new and greatly improved tracking tool for the Clear the Air Challenge. The new tool will require all users to re-register, but the registration process will only take about 30 seconds and users now have the ability to sign up using their Facebook profile.

During the registration process you will be asked to join a team/network, although it’s not required. If you do not see your team/network listed, please email tracker@ppbh.com with the following information:

The Challenge has approximately $10,000 in prizes to give out this year to participants. A number of weekly prizes will be randomly given to people who have earned badges. Grand prizes will be given to the winners in various categories, including: most trips saved, most miles saved and overall champion. The Grand Prize for the overall individual champion will be a $1,300 pair of powder skis provided by Ramp Sports.

Here are some of the features of the new technology implemented this year: 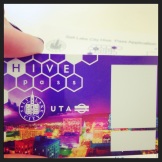 Passes Are Another Way SLC Residents Can Help Clear the Air

For nearly two months, Salt Lake City Council members have been battling each other for bragging rights and district pride in a challenge posed by Mayor Ralph Becker in April to see who could put the most new Hive transit passes in the pockets of residents.

Well, the results are in and Councilman Luke Garrott’s Fightin’ Dist. 4 has emerged the victor. As promised, all Dist. 4 residents who purchased Hive Passes will be treated to a Salt Lake Bees game on June 18 (vs. the Memphis Redbirds) at 7:05 p.m. at Smith’s Ballpark.

“While our Dist. 4 residents get the prize, it’s truly the case that anyone who has already purchased a Hive Pass is a winner,” said Mayor Becker. “Not only does the discounted pass get you were you need to go, but using it is one of the best ways anyone can help make a positive impact on our air quality challenges.”

“I’m proud of the Dist. 4 folks who work at both reducing air emissions and recognizing a great transportation deal when they see one,” said Councilman Garrott.  “It’s a win for everybody in the Valley as the City supports a pass aimed at enhancing mass transit.”

The new Hive Pass is a pilot program created through a partnership between Salt Lake City and the Utah Transit Authority that is initially only available to Salt Lake City residents. The annual pass is good on all UTA TRAX, Frontrunner, bus and S-line Streetcar services and available for an up-front payment of $350 or for $360 in twelve monthly installments. The pass is good for one-year after its first use.

For more information on the Hive Pass visit: http://www.ridewithhive.com/.

[VIDEO] Get Inspired to Clear the Air

While you’re revisiting resolutions to exercise, eat healthy and spend more time with those you love (a great way to start the new year!), consider making one more resolution — to help clear the air.

Through the winter Care to Clear the Air project (2010-2012), a series of videos captured the stories of residents making a resolution to limit their impact on air quality by driving less.

Watch the videos below to hear from people that have done everything from moving closer to where they work, to biking, carpooling and taking public transit.

Their stories will inspire you to make your own resolution to help clear the air!