Summertime . . . and the Air is Nasty

We’re all used to winter smog here along the Wasatch Front, with brown haze moving in and obscuring the mountains. But there is another pollutant in the valley, invisible but no less dangerous — ozone.

Ozone, a molecule consisting of three oxygen atoms, is created when nitrogen oxide (NOx) and volatile organic compounds (VOCs) mix and are heated by the sunlight.

NOx and VOCs are typically emitted by motor vehicles, but they can come from consumer products as well as industrial sources. (Read more about how ozone forms.)

Ozone is often found in the Earth’s stratosphere, where it plays a beneficial role by protecting us from damaging rays. But when ozone sits in the atmosphere where we can breathe it in, it can be very damaging to our health.

In low levels, ozone is generally benign. However, as the concentration begins to rise, it can affect those with a sensitivity to poor air quality, such as people with pre-existing respiratory conditions, children, and the elderly. Higher concentrations, as well as long term exposure to ozone can be permanently damaging to the lungs, and can even cause a heightened risk of heart disease, even in healthy adults. And unlike particulate matter, ozone can’t necessarily be escaped by going to higher altitudes.

Ozone on the Wasatch Front

Unfortunately, Salt Lake Valley is a hot spot for ozone pollution. According to the state Department of Air Quality, Salt Lake City violated the federal ozone standard of 70 parts per billion at least 20 times in 2017. On May 2, 2018, the EPA formally designated the Wasatch Front as a marginal nonattainment area, giving the state of Utah three years to come up with a plan to reduce ozone pollution to sustainable and healthy levels. 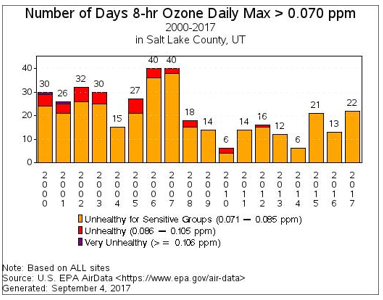 There are several new policies being put in place designed to limit and eliminate sources of the compounds that react to form ozone. Most notably, new vehicle and fuel standards were recently finalized by the EPA that will help.

The Tier 3 standards, as they are known, will reduce the emission of NOx and VOCs by as much as 80% and particulate matter by 70% in new motor vehicles. Even if you don’t drive a Tier 3 car, new Tier 3 standards for fuel can clean out an older car’s pollution removal systems, so after a few weeks even Tier 2 cars using Tier 3 fuel could be cleaner by up to 14%.

Fortunately, there are several simple steps we can take every day to avoid inhaling high concentrations of ozone and keep your lungs healthy:

Ozone is a big problem for Salt Lake Valley, but with these few simple changes, we can all be part of the solution for reducing this “summertime scourge.”