Today, Mayor Jackie Biskupski and a coalition of U.S. mayors joined with the Sierra Club’s Ready for 100 campaign in a new effort to engage and recruit mayors to endorse a goal of transitioning to 100 percent renewable energy in cities throughout the country.

Salt Lake City announced its 100 percent goal last July when the Mayor and City Council passed a joint resolution establishing the goals of transitioning the community’s electricity supply to 100 percent clean energy by 2032, followed by an overall reduction of community greenhouse gas emissions 80 percent by 2040.

On April 11, 2017, Salt Lake City released its Climate Positive Plan, which outlines the programs that will help transform and orient the local economy towards meeting those clean energy goals.

Mayor Biskupski has joined the Sierra Club’s Mayors for 100% Clean Energy campaign to highlight the importance of climate action and to showcase the unique ways Salt Lake City is collaborating on this vision, particularly with local utility Rocky Mountain Power.

“Climate change is one of the most challenging issues of our time. Progress depends on collaboration,” said Mayor Biskupski. “I’m looking forward to sharing our example of how that’s working in Salt Lake City, while encouraging other leaders across the country to join with us in this historic commitment.”

In August 2016, the City signed a Cooperation Statement with Rocky Mountain Power, establishing a framework for creating pathways toward the 100 percent renewable electricity goal. This includes development and procurement of large-scale renewable energy projects; energy efficiency programs; the build-out of electric vehicle infrastructure; and progress on smart grids.

Ahead of the U.S. Conference of Mayors annual meeting in Miami Beach in June, today’s launch of Mayors for 100% Clean Energy aims to demonstrate bold local leadership and showcase the depth and breadth of support from city leaders for a complete transition to renewable energy.

“Mayors can lead our nation toward a healthier, stronger and more prosperous country by championing a vision of 100 percent clean, renewable energy in their communities. Cities don’t need to wait for Washington, D.C. to act in order to move the ball forward on clean energy,” said Sierra Club Executive Director Michael Brune.

Read the sign-on letter for mayors below, and learn more at www.sierraclub.org/ready-for-100 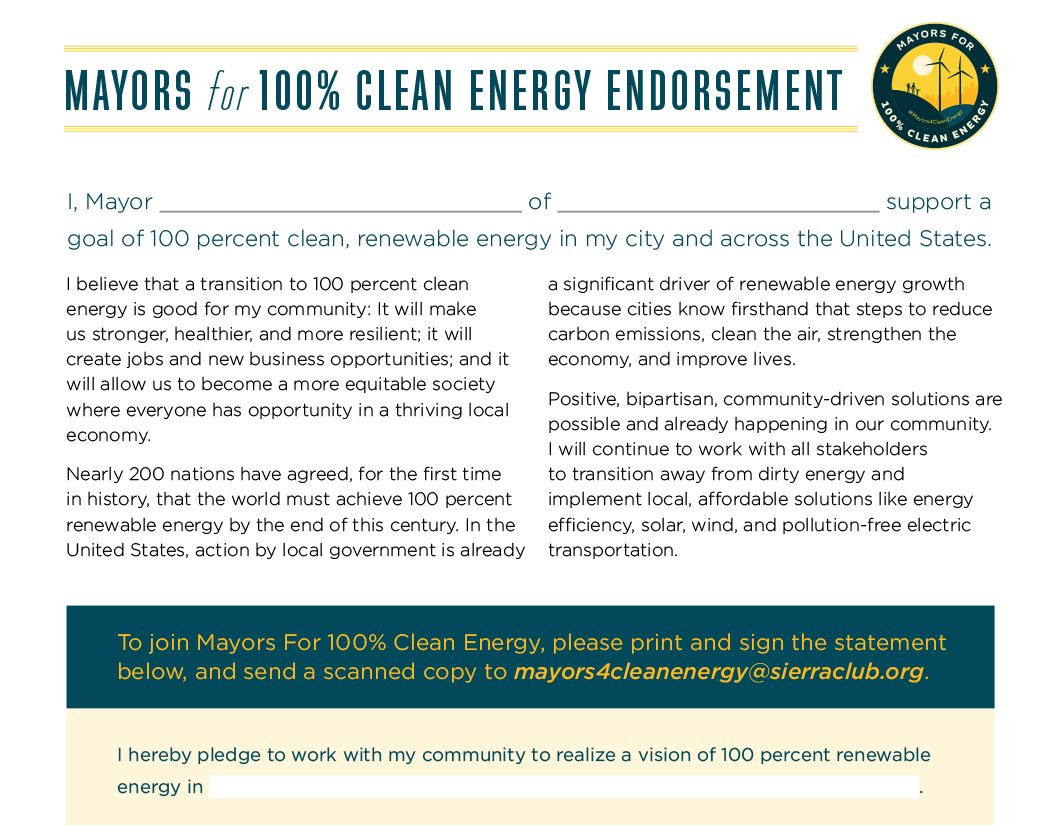