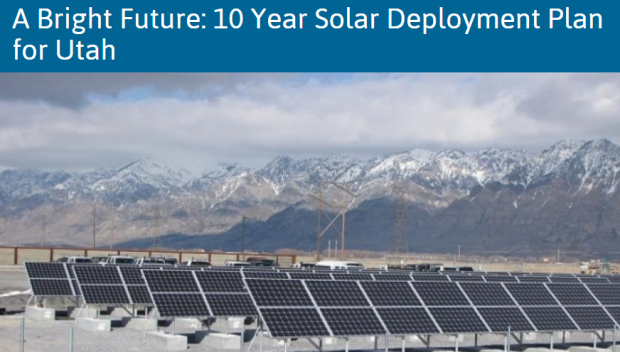 Solar’s been in the news a lot lately. Tax incentives, rate structures, and more have been keeping policy makers, utility staff, and renewable advocates busy.

One reason is that solar is growing at an exponential rate! In fact, Utah is now the 16th largest solar producer in the country.

Our state’s rooftop solar energy production has grown from one-tenth of a megawatt to an estimated 140 megawatts in just ten years. This means that the market for rooftop solar power has grown by 140,000% in a decade, and that doesn’t even include the increase in utility-scale production!

In order to ensure that solar production can continue to grow, the local non-profit Utah Clean Energy recently released A 10 Year Solar Deployment Plan for Utah, which was produced in partnership with Salt Lake City.

Salt Lake City is dedicated to helping our residents and businesses access solar energy not only to reduce emissions and help clear the air, but to support economic development. Solar jobs in Utah are growing at twice the national average. That’s something to get behind!

Of course, continued growth in solar production is also critical for Salt Lake City to meet our goal of becoming Climate Positive and reducing greenhouse gas emissions 80 percent by 2040 (compared to a 2009 baseline).

The Solar Deployment Plan is an updated resource that lists some of the barriers and challenges we face in helping solar continue to grow over the coming years. Here’s a rundown of what it recommends:

Shared community solar projects offer another solution for cost or space restrictions by allowing people to purchase a portion of solar energy produced by a larger, offsite installation. Utilities should prioritize this type of shared resource, like Rocky Mountain Power’s Subscriber Solar.

The permitting process for solar can be very complex because each city and county government has different permitting procedures. This complexity increases the time required and cost for people who want to install as they navigate multiple inspections, permit reviews, and high fees. Streamlining this process by adopting statewide standards could help reduce the hassle associated with permitting.

Interconnection hooks up individual rooftop solar projects to the city’s electrical grid, allowing the owner to sell any excess solar energy back to the power company. Interconnection reduces energy waste and allows us to use the full potential of existing solar, but the current process isn’t efficient enough to accommodate the rapid increase in solar. Standardizing interconnection applications and approval could again be helpful in reducing delays and cost.

Electric utilities lose money on rooftop solar (aka “distributed generation”). One of the biggest reasons is that utilities earn more when they own not only the transmission lines for electricity, but also the resource generation (i.e. a coal plant or hydro facility). When people opt-out of that model, it costs utilities more.  A solution is to support utilities in adapting to a business model where rooftop solar is encouraged.

Resiliency is an important factor in any power system, as it needs to be able to withstand natural disasters and extreme weather, and solar is no exception. The cost of energy storage and the lack of consumer awareness about energy storage are barriers to increasing the resiliency of Salt Lake’s solar system. These problems could be remedied with increased education and possible tax incentives for adopting battery storage systems.

Although the challenges above are significant, we believe solar will continue its upward swing. It must– if we’re to successfully combat the worst effects of climate change in the coming decades.

Salt Lake City looks forward to supporting sensible solar initiatives and continuing to make our city one of the greenest, clean energy-fueled communities in the nation.

You can read more about the Solar Deployment Plan in the news stories below, or make sure to download a copy for yourself!