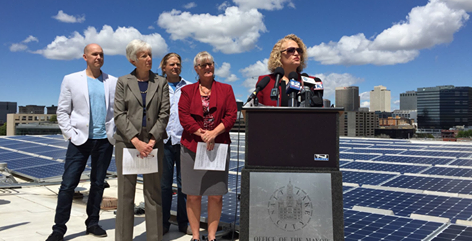 In a show of broad cooperation and commitment to addressing one of the most pressing needs of our time, Mayor Jackie Biskupski on Tuesday joined 32 other mayors from cities around the United States in asking President-elect Donald Trump to work with cities, rather than obstruct their efforts, to mitigate climate change over the coming years.

“We write today to ask for your partnership in our work to clean our air, strengthen our economy, and ensure that our children inherit a nation healthier and better prepared for the future than it is today,” the letter stated.

Mayors of cities as diverse as Dubuque, IA; Columbia, SC; Los Angeles, CA; New York, NY; Charlotte, NC; and more, representing over 35 million citizens in both red and blue states, signed on to the letter.  Together, they reiterated the grave risks to our nation’s economy, public health, infrastructure, and environment by failing to reduce emissions.

“Each month, we see a new heat record breaking for the Salt Lake City area,” said Mayor Jackie Biskupski. “Climate change is real. It’s impacting our communities right now. And we’re calling for the President-elect to join with us to ensure a livable future for our children.”

This summer, Salt Lake City had 21 consecutive days over 95 degrees, the warmest nighttime low ever recorded at 81 degrees, and the warmest June since 1874. This summer, the capital city also broke 3 high maximum records, 14 high minimums, and 17 total heat records.

More recently, Salt Lake City broke the record for the latest frost date.  After 242 days, on November 17, 2016, the airport finally hit 32 degrees—setting another record for the number of consecutive days above freezing.

Local bodies of water have also suffered.  In mid-July, a toxic algal bloom on Utah Lake—caused, in part, by high water temperatures and low water levels—closed the lake, sickened more than 100 people, and put dozens of farmers in Utah and Salt Lake counties in a bind during one of the hottest weeks of the year.

Emergencies like this are not just inconvenient; they cost cities, private citizens, state agencies, and businesses money. The coalition cited a recent estimate that the monetary cost to the American economy of climate change will be upward of $500 billion annually by 2050.

Knowing these risks, Salt Lake City is already taking aggressive action to reduce emissions.  Earlier this year, Mayor Biskupski and the City Council passed one of the most aggressive energy policies in the nation, pledging to source 100 percent of Salt Lake City’s community-wide electricity needs from renewables by 2032, and pledging to reduce overall carbon emissions by 80 percent by 2040.

In the days since the Presidential election, Mayor Biskupski repeated Salt Lake City’s commitment to overall environmental sustainability and emissions reductions. “As a city warming at twice the global average in recent decades, while also suffering from poor wintertime and summertime air, we must lead by example. Nothing is more important than the air we breathe–and, knowing we have as many inhalers as lunch boxes in our city schools, we do not have time to waste.”

The letter furthermore calls for leadership from the Trump administration on everything from transit, infrastructure, and renewable energy to the Paris Climate Agreement, and urges cooperation with cities on those fronts.

However, as the mayors conclude: “While we are prepared to forge ahead even in the absence of federal support, we know that if we stand united on this issue, we can make change that will resonate for generations. We have no choice and no room to doubt our resolve. The time for bold leadership and action is now.”

The letter to President-elect Trump was signed by member cities of the Mayors Climate Action Agenda (MNCAA), or the #ClimateMayors, and can be viewed here: http://www.climate-mayors.org/our-letter-to-the-presidentelect-november-2016/

Like Loading...
From: 2016, air pollution, Air Quality, Climate Change, Renewable Energy, salt lake city, Sustainable Food
← The Green Urban Lunch Box’s BAD APPLE BASEBALL ft. U of U Softball
Ditching the Disposables, a Guide to Using Less this Holiday Season– and Every Day →
No comments yet