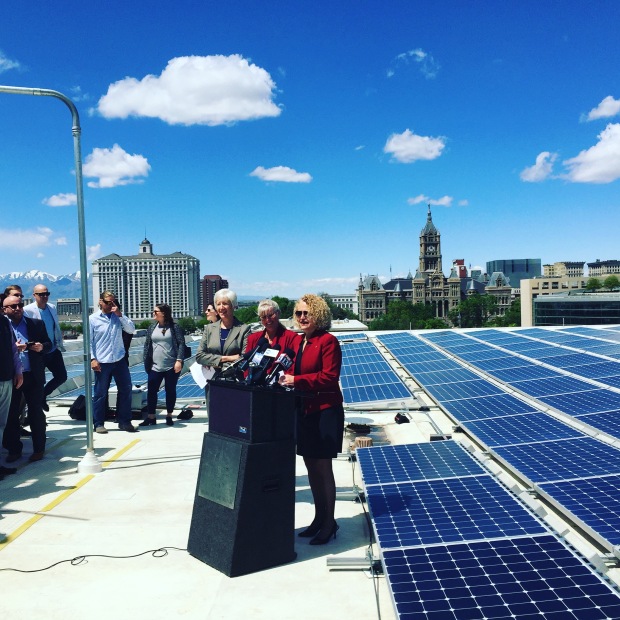 Salt Lake City will soon be powering a sizable portion of its government operations with clean, renewable energy from the sun. The City has committed to a three megawatt (MW) subscription of solar energy through a new program offered by Rocky Mountain Power entitled Subscriber Solar.

“We are thrilled to align with Subscriber Solar and in invest in carbon-free energy to better serve our community,” says Mayor Jackie Biskupski. “This commitment is just one of many major steps we will make towards a more sustainable energy future during my time as Mayor.”

The three megawatt commitment more than doubles the amount of clean energy Salt Lake City is using to power its municipal operations. Through Subscriber Solar, the City will access a guaranteed amount of annual energy output for its enrolled meters and will lock-in costs associated with the energy generation charge portion of its bills for up to 20 years.

Subscriber Solar is a new program offered by Rocky Mountain Power that allows customers to align their energy needs with power generated from a new solar farm. The 20 megawatt Subscriber Solar project is located in Holden, Utah, approximately two hours south of Salt Lake City, and will be completed in December 2016. Enrolled customers will be switched over to the Subscriber Solar rate schedule starting in January 2017. The program is now accepting commercial customers and residential customers can begin enrolling on June 21st. A limited amount of solar blocks are available and customers will be enrolled on a first come, first served basis.

More information is available at www.rockymountainpower.net/subscriber