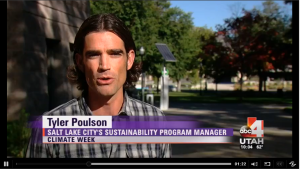 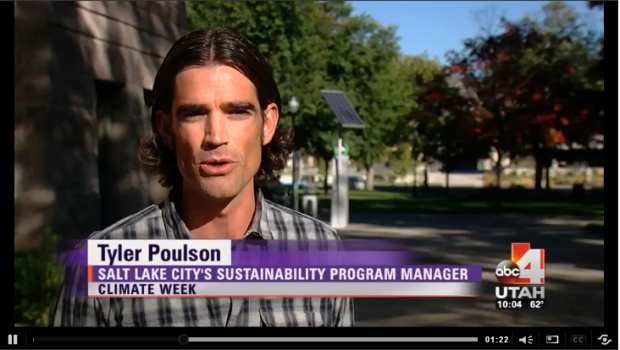 Yesterday, ABC 4 News stopped by Salt Lake City Green to get the scoop on Climate Week — what the City is doing to reduce its impact and what you can do to get started! It’s a fantastic story. Click on the video above to watch the story on Good4Utah.com.

SALT LAKE CITY (ABC 4 News) – Salt Lake City officially kicked off its first ever Climate Week. The initiative is designed to increase awareness about the local realities of climate change, what the city is doing to prepare for the future and what residents can do to reduce their impact at home.

No matter your stance on climate change, it’s undeniable Utah is heating up.

Salt Lake City’s Sustainability Program Manager Tyler Poulson explained, “In Utah in recent decades temperatures have been increasing about twice the global average and its certainly something that’s not gone unnoticed in Salt Lake City.”

“We’re having monthly workshops for about 26 employees from all departments so airport, fire, police, water and everything in between, and we’ve been learning about climate change, its impact locally and how to make a difference,” said Poulson.

Leaders in that group came up with Climate Week to share what they’ve learned with the community. They say there is five easy steps residents can take to reduce their carbon footprint by about 5,000 pounds of CO2 emissions a year, and even save some money about $500 a year.

Some other actions Poulson suggests, “Keeping your tires fully inflated, or if you’re a Salt Lake City resident checking out the Hive pass for public transit. Some other actions include changing out your lightbulbs to LEDs, they’re really energy efficient and starting to look great, and then also downsizing your trash can and using renewables.”