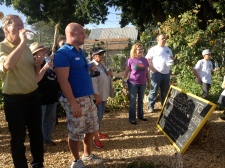 This is a guest blog written by Sara Rose Tannenbaum of Salt Lake City’s SmartTrips Program.

On Saturday September 21st, over 40 neighbors gathered on the corner of 300 North and 900 West. While adults mingled under the shade of the giant Coca-Cola billboard, kids chased chickens and discovered eggs in the maze of sunflowers.

The reason for their gathering was the Fairpark Promenade, a collaborative “Community Walk around the Block” hosted by the Fairpark Community Council, the Urban Growth Garden and SmartTrips Fairpark.

Before parading down the sidewalk, participants marked where they lived on a hand-drawn map and linearly arranged themselves according to how long they had been in the neighborhood. Old time residents were given a ribbon pin to identify them as storytellers. Kids, including the Westside Dance girls in their cultural costumes, were handed a piece of colored chalk and an “I Spy” Neighborhood Scavenger Hunt.

The walk provided an opportunity to walk, talk and learn about the neighborhood and one another. Parents from Jackson Elementary School shared how three years of visioning and cultivating yielded a beautiful garden. Residents reflected on the freeway, how it divided their neighborhood and siphoned off the West Side. Laminated old photographs illuminated what once was a bakery, a library, a Levi shop.

Fairpark Community Council chair Steve Johnson helped dispel the myth of a corner building once believed to be the Governor’s Mansion. A local homeowner explained the process of architectural restoration. While kids drew trails of chalk hearts and peace signs on the sidewalk to chart the Promenade’s path.

The event marked the near culmination of the 2013 SmartTrips Program, which has been hand-delivering educational active/alternative transportation kits by bicycle and facilitating community events such as the Fairpark Promenade since March. Twelve percent of all homes, or 195 Fairpark households, signed up to receive free bike lights, 7-day UTA passes, pedometers and coupons to local businesses.

By focusing on one neighborhood at a time, SmartTrips embraces the identity and community of each place.

Not many know where the Fairpark neighborhood is. They think only of the fairgrounds, home to the Utah State Fair, not of the community nestled above North Temple and below 600 North where Rose Park begins. Now, when you travel though a beautiful mosaic underpass, pass a thriving garden beneath a corner billboard and spy chalk drawings of peace signs and hearts on the sidewalk, you’ll know you’re in the Fairpark neighborhood.

SLCgreen note: Do you want to see SmartTrips in your neighborhood? Comment here or email SLCgreen@slcgov.com to let us know!